The Yonex Arcsaber 11 was released in 2013, much to the surprise of many. During this time, many people assumed that the Arcsaber series would be phased out in favor of a newer model.

This badminton racket is regarded as an all-around performer, but will it suit your playing style? You’ll have to read the rest of this Yonex Arcsaber 11 review to find out. Allow me to shed some light on how this will affect your in-game performance and whether it will provide the best bang for your buck.

This model falls into the 3U weight category, which means it weighs between 85 and 89 grams. This is a relatively light racket.

Meanwhile, the grip is G4, which is the standard in the Yonex badminton racket family. I’m used to playing with Yonex, so gripping isn’t a big deal for me. It’s just the perfect size for me.

It is factory-strung, making your life much easier. It’s strung with BG65Ti, which is one of my personal favorites. String tension ranges from 19 to 24 pounds. For a product of this caliber, I believe that a higher tension would have been preferable.

It is primarily red in color, with hints of lime and red. At first glance, it is easy to confuse it with its predecessor, the Yonex Arcsaber 10. The two are nearly identical not only in terms of appearance but also in terms of technological features and overall construction.

It’s impressive that it has Neo CS Carbon Nanotubes visible on both sides of the head. The latter enables the shuttlecock to stay on the string bed for a longer period of time. As a result, the repulsion power will be increased.

Its frame is also made of Sonic Metal, which ensures that the shuttlecock returns sharply.

Meanwhile, the T-anchor that connects the head and shaft reduces excess torque while improving your precision with each hit.

All of this points to the Yonex Arcsaber 11 being an excellent all-arounder. If you’re convinced, let’s go ahead and buy it now while the best deals are still available. 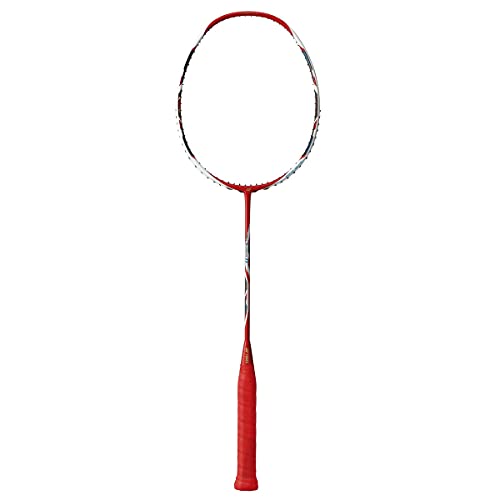 Here are a few of the reasons why this model is praised in this review of the best badminton rackets on the market.

It’s great for comfort, in my opinion. There are numerous reasons for this, including the fact that it is lightweight and has an excellent grip. It has an ergonomic design that can effectively minimize fatigue regardless of how long you play on the court

You’ll appreciate the fact that it’s lightweight, especially if you’re new to the sport. With a weight of only 88 grams, this will aid in the improvement of your response time after an opponent has thrown a shot. Because of its weight, it will have excellent agility and repulsion.

From the specifications to the overall design, there should be no doubt that this is very simple to use. Even if you’re just starting out, it’s difficult to dislike badminton.

This racket, on the other hand, has its own set of flaws, though I should point out that these are minor issues that have no bearing on its overall performance.

The steep price for a racket that is ideal for a beginner can be an issue. This is one of Yonex’s trademarks. However, I believe that this is pricey for a reason or a combination of reasons. The price is easily justified by the product’s performance.

Although speed is excellent, there are others who are faster in terms of response time. It will perform well in drop shots, which will require quick execution.

The Yonex Arcsaber 11’s aerodynamics will allow it to excel at net kills and net shots in the frontcourt. This can also be attributed to the racket’s long handle.

Defense and attack will be impressive in the mid-court, on the other hand. This is where the racket will outperform many of its rivals. It reacts quickly. It also has a large sweet spot, making it an excellent choice for defensive players.

Normal and reverse slicing will be fantastic as well. You can do it at a faster rate and without exerting too much effort.

This badminton racket is about more than just good news. If there is one thing I wish were different, it would be the smashes. Its smash demonstrates a lack of power due to its lightweight. If you want something with a lot of smashing power, I recommend the Yonex Voltric 80.

Who is it intended for?

With the price tag, this is undoubtedly a badminton racket suitable for those with disposable income.

This is for players who want to be the control king. Because of its construction and weight, you will have complete control over every move you make. It is also intended for those who wish to play defensively.

#1. Is Yonex Arcsaber a good choice?

The Arcsaber 11 is an excellent racquet. Its main strength is that it is a fantastic all-arounder, capable of delivering a high level of power while also being able to turn up the speed to deal with defending, mid-court exchanges, and frantic net play.

#2. Which one is superior, Arcsaber or Duora?

You’ll be able to use Duora 10 much more efficiently once you’ve gotten used to the two racket frames. Finally, both rackets are very similar. If you’re looking for a racket that can do it all, the Yonex Arcsaber 11 is a good choice. However, if you want to experiment with new technology, Duora 10 is a good option.

#3. Which one is superior, Astrox or Voltric?

The Yonex Astrox 99 has a stiff flex and its weight is more evenly distributed in the frame’s head, making it only slightly more forgiving. Voltric Z Force II has an extra-stiff flex and a unique aerodynamic frame that reduces air resistance and increases shot power.

#4. Which is superior, the Yonex Nanoray or the Arcsaber?

The Nanoray 750 is the best headlight racket. The majority of the Arcsaber series is balanced, and while some rackets are better at repulsion, others are better at control. Arcsaber 11 has an even balance (slightly head heavy) and a positive repulsion.

I personally recommend the Yonex Arcsaber 11 as an all-around badminton racket. Yes, the price may be an issue, but once you hold it in your hands, you’ll understand why so many people are willing to pay a premium.

You can never go wrong with this racket, which features cutting-edge technologies and is a well-known brand. If you want it, let’s get it right away!

badmintonnew.com is a participant in the Amazon Services LLC Associates Program,an affiliate advertising program designed to provide a means for sites to earn advertising fees by advertising and linking to Amazon.com. Amazon and the Amazon logo are trademarks of Amazon.com, Inc. or its affiliates.

You can find out more about which cookies we are using or switch them off in settings.

This website uses cookies so that we can provide you with the best user experience possible. Cookie information is stored in your browser and performs functions such as recognising you when you return to our website and helping our team to understand which sections of the website you find most interesting and useful.

Strictly Necessary Cookie should be enabled at all times so that we can save your preferences for cookie settings.

If you disable this cookie, we will not be able to save your preferences. This means that every time you visit this website you will need to enable or disable cookies again.